I guess to answer it clearly it would help if you had a little background about my journey with learning and loving with the animals and people who helped me arrive at where I am today.

Back almost thirty years ago I attended a popular, national dog training school with my beloved Abbie. Abbie was a beautiful, regal, yet gentle-tempered, blue Standard Poodle. Even though I purchased Abbie, I had essentially rescued her. I was her fifth home by the time she was fifteen months old and the day I brought her home she was covered in hot spots, matted hair, and soon to be discovered terrified of men. Over the next two years, I taught her everything I knew how and took her to work with me at the grooming salon almost every day for socialization.

I left for six weeks with my beloved Abbie with the high aspirations of youth. We quickly jumped into the curriculum and excelled in our training. Abbie learned how to sit, down, heel, and all the other obedience behaviors of the day and she learned how to avoid the quick, jerk on the chain around her neck. She learned that if she moved from any position she was told to hold that the chain around her neck would swiftly and sharply tighten. She learned that to stop the prongs digging from the prong collar set up high on her throat that she could pick up the stick and retrieve. I learned how to convince clients that these tools ‘didn’t hurt’ by demonstrating on their forearms, never mind that your arm isn’t your neck and that human skin is thicker than a dog’s. I learned how to make a dog walk on a loose leash in less than fifteen minutes as I watched my six-foot four male instructor yank my loyal, gentle, forty-pound girl around the class to the point she was crawling out of fear, but she heeled! I learned what abuse people will allow done to the beings they love because a person of authority told them it was the way to do it. I was mostly successful at convincing and teaching people to apply these methods to their dogs. But don’t get me wrong, I used treats and praise too. I was very successful at teaching learned helplessness to the dogs, to not move a muscle or be corrected for anything else they tried.

Abbie and I graduated, she was trained in high-level obedience, personal protection, assistant dog tasks, scent detection, tracking, all in six weeks... but that happy, trusting, sparkle in her eyes was gone. She was still friendly and wagged her tail and I thought she was happy. She definitely had a better life than many dogs. We went on to compete, and she earned multiple titles. 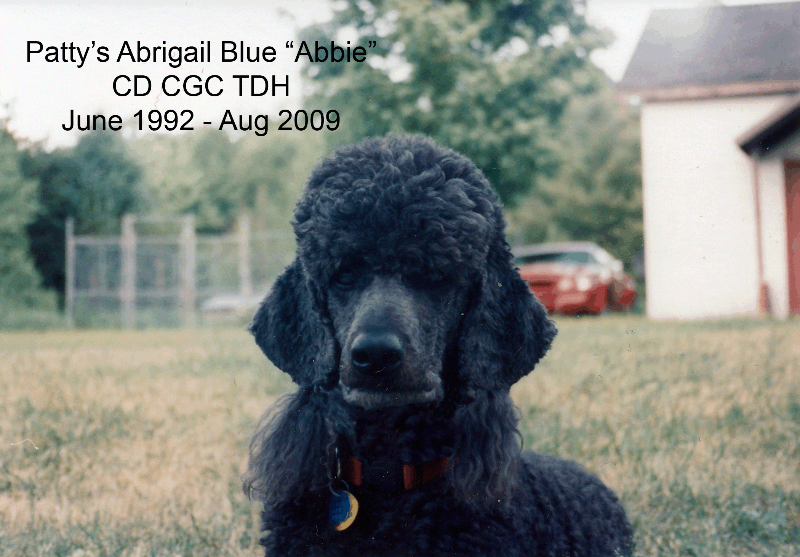 Fast forward a couple of years and a friend, who was involved in parrot rescue, introduced me to the clicker. After listening to her explanation for a bit, I liked the idea but told her that it would never work with dogs because, “They needed to know who was in charge.” But this peaked my interest and I started reading more about clicker training and using it with some of my clients, albeit rather haphazardly. I taught Abbie her first behavior of a ‘bow’ with the clicker. It was really challenging because she had a history of being corrected for doing anything other than what she was told. Abbie lived almost eighteen years and toward the end of her life, when everyone was getting cookies, the only behavior Abbie offered... was a bow.

A few years later I adopted an English Bull Terrier, think Spuds McKenzie or the Target dog, from a rescue in Indiana. His young life was off to a really rough start. Found as a stray, starved, beaten and scarred. Later in life we discovered he had carried a secret with him for many years, a bullet lodged in his abdomen from those early days of his youth. He was confident fellow and once he realized he was safe, Rippy was very happy. Boy, was he a spitfire and a handful, though. First of all, he was a terrier with all his terrierness. Immensely strong, determined, focused on his prize and intense. This is the type of dog many people say need a strong, firm hand. That we need to dominate this type of dog or it will be dangerous. He was my opportunity to use what I had learned about clicker training, to use a kinder, gentler way.

I wasn’t perfect. Old habits die hard. I still did use some punishment with him, but the pivotal moment, the moment that I have never looked back from... the moment that changed how I looked at dogs and everything else in this world... was a moment of frustration. It had taken sooo long to teach him to walk on a loose leash and not focus on everything his terrierness told him to and this was due to my lack of experience and understanding of how to use clicker training correctly. But I knew if I just put that prong collar on him I could have him heeling in fifteen minutes, so in a instant of weakness, that’s what I did. We had spent a year building trust between each other. The day he came home with me I promised him that I would NEVER hurt him and in a blink of an eye, I broke that promise and with a swift yank and tightening of the collar, I broke his heart. I will never forget the look in his eyes... after he yipped and turned toward me in surprise. After a breath of revelation, I reached toward him, and he wagged his tail, the ever forgiving animal that he was and I removed that collar and have never put a choke chain, prong or shock collar on another dog since.

In a culture with instant gratification, the temptation for a quick fix is like a candy dish to a child. But we supposedly have a bigger brain and are more capable than anything on this planet. Whether you believe this or not, why teach something with pain and intimidation that can be taught with trust and good things? I have never been bitten by a dog because I clicked a clicker or delivered a treat at the wrong time. I HAVE been bitten because of a poorly timed correction and pushing a dog beyond their threshold. Even more so, I have witnessed countless dogs bite being dominance rolled, hit, scolded, punished, shocked and yanked on collars. I work with aggressive dogs on a weekly basis. I work with ALL kinds of dogs, and I have yet come across a dog that needs to be shown who is the boss by physically or mentally bullying and intimidating them.

So, why did I choose the method of training that I use and teach...

#1 Because I promised Rippy... and I carry no guilt teaching everyone I can how to get behavior change effectively, humanely and with kindness.

#2 Because after 30 years of working with people and their dogs, it IS the most effective method to influence behavior change that I have found.

#3 Because I love fostering a relationship of trust.

#5 Because it is fun to see an animal’s “AHA” moment of realization that you understand them and they understand you. And

And after some time and patience... Rippy learned to walk on a loose leash!